During the planning stage a stand at the Westmorland County Show to showcase the work that SCOHSG does and to encourage agricultural companies and farmers to consider joining our group seemed like a good idea.

The only problem being that the group could not afford to book a stand in one of the show’s gazebo aisles so that its success or otherwise was very weather dependent. Still, it was in September and we often have an Indian summer in September, so, full of optimism we agreed to share an outside stand with the Construction Industry Working Well Together Project. 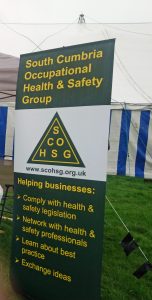 James Riddick, SCOHSG Chairman agreed to organise this event and he was ably assisted by Phil Sedgwick, Carol Stearne and Geoff Price on the day.

Our optimism about the weather proved to be misplaced. The 12th September 2019 dawned wet and windy – features that characterized the rest of the day. Add to that a poor stand location – behind the large cattle marquee – and no shelter from the rain and wind for our SCOHSG representatives, or for the safety pamphlets brought for display, plus a field that became muddier by the minute and it becomes clear that SCOHSG’s publicity initiative was in danger of becoming a rich source for a comedy TV programme!

As Phil Sedgwick said: “…What a lovely experience it was! Rain? It’s only a little water! Tucked away behind the cattle tent (yes, that’s why you didn’t find us) we whiled away the hours eating the chocolates brought for the genuinely interested (and of course the kids!). The school kids loved the bright yellow SCOHSG rulers and pens… Will we do it again? Maybe…”

And, pity poor James who organised the SCOHSG stand. After he had packed up the stand and was ready to go home, he was told that he would have to leave his car at the show ground until the next day because there wasn’t a spare a tractor to pull him out. They were all being used to move vehicles on the visitors’ car park rather than the exhibitors’ car park.

So, a big thank you to committee members who braved the elements to help publicise our group and to those who were scheduled to join them later in the day who advised by James not to make the journey.

And, if we do it again, we’ll definitely have more robust plans for adverse weather conditions and try to get a better stand location!

SCOHSG at the 2019 Westmorland County Show

You will find a warm welcome, in a delightful hotel near junction 36 on the M6 Morecambe Bay, and the opportunity to up-date your workplace health and safety knowledge and skills from presentations by HSE specialists and industry ‘experts’.

Details of future monthly meetings are listed on the events pages.

Crooklands is near the centre of our geographical area which stretches south to Lancaster, north to Ambleside, to the west coast of Cumbria and east to the Yorkshire border. Companies who are based further afield are also welcomed as members.