Mark began his presentation with a brief overview of the range of English Heritage’s properties (over 300 properties), the scope of their responsibilities and their work throughout England.

He explained that English Heritage had to adopt a hierarchical approach to site risk management due to limited funding and the large number of properties it was responsible for. This was achieved by setting up an English Heritage Site Risk Register that recorded significant residual site risks and prioritised sites on a national and a regional basis with management action plans and resource allocation for the top ten sites at each level. The aim of this approach was to reduce risk so that it was As Low As Reasonably Practical (ALARP) for all English Heritage sites.

Mark said that English Heritage based its approach to visitor safety on the publication: Managing Visitor Safety in the Historic Built Environment that was published by the Visitor Safety in the Countryside Group in 1997 (www.vscg.co.uk ). The principle aim of this group was to develop a consistent approach to visitor safety management that would protect and enhance the natural and historic built environment as well as encouraging public access to sites of historic interest. He explained that senior representatives of HSE have endorsed this approach saying:

Like all workplace Risk Assessment this approach focuses on a Historic Built Environment Risk Control System that categorises risk as trivial → moderate → intolerable and assesses the likelihood of the risk causing harm and the severity of the risk. This process includes consideration of factors such as:

Mark then handed over to Mike who explained that the Furness Abbey site had major structural problems that were difficult and expensive to resolve due to the original construction methods.

For instance, trial holes in 1924 indicated the North Transept walls were constructed on timber logs which was a likely cause of the observed signs of wall movement. 1927 saw the start of wall underpinning using shallow spread footings (2½ feet below wall footings) including 13th Century part of the Presbytery.

In 2007 staff noticed that Vousoirs at the top of 15th Century Presbytery north wall arch were gradually falling out and a 50mm crack recorded at the top of the wall was identified as recent and rapidly occurring therefore scaffolding was erected to investigate further and establish monitoring points using punched metal disks. 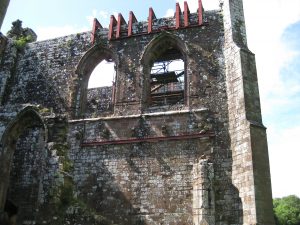 During a period of two months the crack opened a further 5 mm. In addition, a borehole survey, to investigate the underlying cause of the problem, indicated that a combination of loose sandy soils, changing ground water levels and ground changing ground water flow patterns was leaching soil particles from underneath the Presbytery north wall arch that had been added in 15th Century

Mike then handed over to Lucy who gave members a fascinating overview of Furness Abbey, the North West’s grandest and most extensive monastic ruins. It was founded in 1123 by Stephen of Blois who later became King of England. It grew in importance and became the richest Cistercian Abbey before the 1557 Dissolution of Monasteries by Henry VIII.

She explained that an exciting excavation of an Abbot’s grave, in 2009, had led to the discovery of the Furness crozier that is one of the important exhibits in the site museum.

Lucy then summarised the main health and safety problems for staff and visitors at the Furness Abbey site:

Lucy explained that additional safety problems had to be dealt with when the Furness Abbey Fellowship organised one of their Mediaeval Fairs on site. These necessitated a specific Event Management Plan and Risk Assessment to ensure that attractions such as re-enactment combat and Mediaeval crafts including hot work were undertaken safely and that there were adequate controls and/or provisions for: vehicle movement, erection, use and dismantling of temporary structures, coping with inclement weather and security/counter terrorism measures as appropriate.

Members were then given a guided tour of Furness Abbey that focused on the health and safety management of the site. 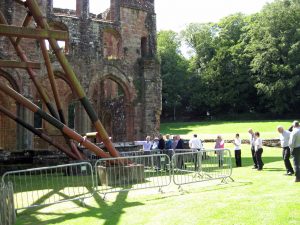 At the start of the tour Lucy explained that one of the site’s major management problems was trying to get the right balance between the need to display safety warning signs as well as preserving the historical context and integrity of the site. 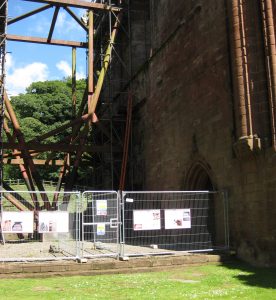 After the tour members reassembled in the meeting room for an interesting discussion about the site’s safety management problems, including construtive suggestions to help resolve some of the sensitive site safety problems where finding the right balance between safety requirements and maintaining the site’s historical integrity are particularly difficult.

Jim Tongue, Chairman, South Cumbria & North Lancashire IOSH Branch then thanked Mark, Mike and Lucy for organising such a useful and informative visit that had given members an insight into the way that English Heritage was working to improve site safety for visitors and staff while preserving the historical context of Furness Abbey.

Members felt that this was a worth-while site visit that gave them a clearer understanding of the safety management problems facing the custodians of England’s heritage sites.

Other organisations that provide safety guidance for safe management of leisure activities: http://www.hse.gov.uk/entertainment/leisure/useful-links.htm